Usually a biological sample is made up of more than one component (inorganic samples as well). Some studies require the separation of these components from the mixture. Chromatography is a technique which can separate the different components in the sample.

Hence the different components of the sample will be separated. The difference in the interaction can be explained mathematically with help of the partition coefficient.

If the time is plotted on the X axis and the concentration of the component on Y axis, the exit of the components can be seen in form of peaks. The time at which the peak appears is the tR. Such graph is called as the chromatogram. In the example, the retention time of the compound ‘c’ is around 2 mins. 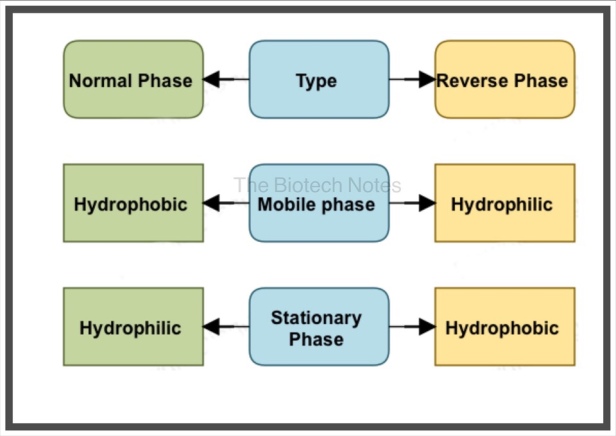 In this type, the molecules are separated for analysis of the component, i.e. for identification or quantification purposes.

Preparative chromatography involves the separation and isolation of one or more components of the sample. The components isolated can be used for some other analytical or experimental studies. Hence this is used as preparatory step for the next experiment.

~ There are different types of chromatography depending on the type of stationary and mobile phase used. Some of the commonly used techniques are:

This is one of the most common and basic type of chromatography. It is used as a qualitative technique. Paper chromatography makes use of paper (cellulose) as the stationary phase while the mobile phase is liquid (appropriate solvent/s).

The paper is suspended in a container containing little mobile phase which saturates the container. The sample is spotted just above the solvent front and paper is allowed to stand in the saturated container for some time. The solvent slowly moves upwards due to the capillary action, carrying the components of the sample alongwith and simultaneously separating them.

The distance travelled by the sample component relative to the solvent is referred to as the Rf value.

It can be obtained by the formula:

Different compound have different Rf values which used to identify the type of components.

(Just for info: watch out this simple yet beautiful demonstration)

TLC is a type of planar chromatography and very similar to paper chromatography. However, in this the stationary phase is a thin layer of alumina (aluminium oxide) or silica gel coated on a sheet of plastic, glass or aluminium. The mobile phase is a single or mix of volatile liquids, which travel through the stationary phase by capillary action. This is mostly used for qualitative purpose. Can be used for both analytical and preparative purposes. In both paper and thin layer chromatography, the separation takes place on the basis of the polarity of the component.

(Just for info: watch this beautiful demonstration of TLC)

A basic liquid chromatography set-up consists of a column with a narrowing bottom filled with stationary phase through which the liquid mobile phase carries the analyte, separating it.

In liquid chromatography, the stationary phase acts like a sieve, where in the small molecules get trapped in the pores of the stationary phase and move out slowly while the larger ones flow through the gaps between the beads and are eluted out faster. This type of elusion is known as of size elusion and separates the analyte components on the basis of their sizes.

The liquid chromatography can make use of any of the one principal to separate the analyte:

In any case, components are dissolved in and carried by the mobile phase through the solid phase. The sample components get separated due to the differences in the way they interact with both the phases. The liquid chromatography is useful for preparative applications.

This is specially useful for the purification of proteins and other charged molecules. It uses cationic or anionic resins for the solid phase and a liquid mobile phase. The separation here is based on the ionic interactions between the components and the two phases.

There are two types based on the charges:

It is commonly used to separate biological molecules such as proteins, amino acids and nucleotides.

This is used to separate the biomolecules based on their ability to the specifically bind the immobilized ligand. The solid phase usually consists of agarose linked with the ligand to which it’s specific substrate from the sample binds. This type is used for separating enzyme and substrate, antibody and antigen, lectins and carbohydrates and so on.

The desired biomolecule retained are detached from the stationary phase using an appropriate solvent and eluted out of the column.

In gas chromatography, the mobile phase is a gas ( known as carrier gas) and the stationary phase is a viscous liquid adsorbed on an inert solid. Usually the inert gases like argon and helium are used as carrier gas, as they are not reactive.

The sample is vaporised before injection into the gas chromatographic column, which is then carried away by the gaseous mobile phase. The component with the lowest boiling point is eluted out of the column first, followed by the ones with the higher boiling point. Hence the components are separated based on their boiling points.

(Just for info: have a look at the instrument)

Have a nice day!

Also read other posts by The Biotech Notes:

If you already have any of these, give your reviews.

One thought on “Chromatography.”