We all know that the ‘Cell is the structural, functional and the biological unit of life’. Any living organism is either unicellular or multicellular. Whatever the case, the cell follows its own life cycle. The life cycle of an eukaryotic cell can be divided into three stages: resting phase, interphase and mitotic phase (M-phase).

– The resting phase includes G0 phase. Some cells do not undergo cell division, rather they enter G0 phase either permanently or temporarily wherein they do not divide and remain either quiescent or senescent.

– The interphase is a preparatory phase, wherein the cells prepare themselves for the upcoming nuclear and cytoplasmic division. This phase can be divided into three different phases: G1, S phase and G2 phase. During interphase the cells grow, replicate their DNA, rearrange microtubules and accumulate the materials for cell division.

I. Resting Phase or G0 Phase

Cells in G0 phase are ones which have entered a non-dividing state either reversibly or irreversibly. The cells which are reversibly or temporarily non- dividing or the quiescent cells, can enter back into cell cycle on receiving an appropriate signal and enter the G1 phase. The irreversibly non-dividing cells either become senescent or differentiated. Cells become senescent when there are DNA damage or any other problem. Cells like neurons usually get differentiated and perform their functions.

Interphase is the phase in which the cell grows till it can divide it’s genetic material and the cytoplasm into two halves i.e. capable of producing two daughter cells. This phase is also known as Preparatory phase. Interphase is, in turn, divided into three different subphases: G1, S, and G2.

During this phase the cell grows in its size. It synthesizes a group of proteins and nucleotides which are required for the synthesis (replication) of the DNA along with other normal processes.

The DNA replication takes place during the S phase. The entire genome is duplicated in this phase and the two copies of DNA are held together at the centromere region.

The main processes that take place during G2 phase are the duplication of cell organelles and rearrangement of the cytoskeleton. This phase is also characterised by the synthesis of other proteins required for the upcoming M phase (mitosis and the cytokinesis).

M phase begins after G2 phase of the interphase. During the M phase, the replicated DNA condenses to form the X shaped chromosomes, wherein each sister chromatid is the entire replicated and condensed daughter DNA.

The M phase is divided into

A. Mitosis characteristised by karyokinesis or nuclear division and

B. Cytokinesis characterised by cytoplasmic division.

Mitosis brings about division of the nuclear material or Karyokinesis in 4 phases called prophase, metaphase, anaphase, and telophase.

During prophase, the chromosomes begin to condense, the nucleolus disappears, and the nuclear envelope disintegrates. The cytoplasmic organelles are pushed to the periphery of the cell. The centrosomes which helps in arrangement of microtubules to form spindle fibres, move to the opposite poles of the cell.

The condensed chromosomes are attached to the spindle fibres with help of protein complex, kinetochore. Each sister chromatid has a kinetochore of its own which help in separation and dragging of each of them to the opposite poles.

During metaphase, the chromosomes are most condensed. The sister chromatids are still connected at centromere and aligned in the centre of the spindle apparatus forming the metaphase plate. 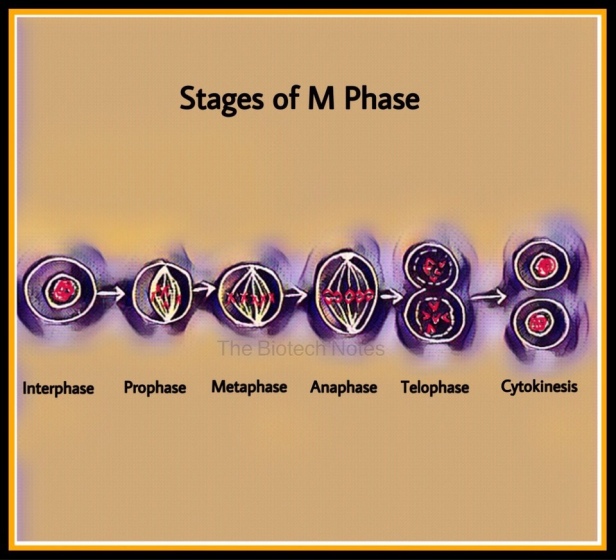 During anaphase the two sister chromatids are pulled apart to form two daughter chromosomes. As mentioned before the spindle microtubules pull the chromosomes toward opposite poles (toward the centrosome) with help of the kinetochore. The cell becomes elongated as the two chromatids move to the opposite poles and are no longer joined at the centromere.

During telophase, the separated daughter chromosomes reach the opposite poles. Once the daughter chromosomes reach the opposite poles they begin to decondense. Along with the decondensation, the transcription and the translation of important proteins begin. Nuclear envelope is formed again and nucleosomes begin to appear within the nuclear area. The spindle apparatus is dismantled and tubulin monomers begin to organize the cytoskeletal structure of the daughter cells.

The nuclear division is accompanied by the cytoplasmic division, which is known as cytokinesis. Cytokinesis leads to a separation of the cytoplasmic components into two daughter cells proportionately. There are some differences in the process cytokinesis in a plant cell and an animal cell.

Animal cells lack cell walls. In these cells a contractile ring composed of actin filaments forms just inside the plasma membrane along the circumference of the cell at the site of metaphase plate. The ring contracts drawing the plasma membrane at equator closer forming the cleavage furrow (similar to the way a drawstring tightens). The cleavage furrow finally contracts completely resulting into two separate daughter cells.

The cell undergoes through different stages of cell cycle to give two daughter cells. Each of the phases of the cell cycle is under very strict control of cell cycle checkpoints. These checkpoints ensures that the previous stage has been completed in a successful error-free manner before initiating the next phase.

The main mechanism that regulate the cell cycle progression involves the cyclin-dependent kinases (CDKs). CDKs are a group of serine/threonine protein kinases that phosphorylate various substrates which co-ordinate and regulate the progression of the cell cycle. CDKs are constitutively present in the cell but are inactive and only activated when they bind their cyclin subunits. These cyclin subunits are synthesized at particular phase and degraded thereafter. When cyclins are synthesized, they bind and activate specific CDKs, resulting in the progression to the next phase. The CDK activity are controlled by the various other promoters and inhibitors as well.

Have a nice day!

Also read other posts by The Biotech Notes:

If you already have any of these, give your reviews.

One thought on “The Cell Cycle”