As we all know, an atom is made up of three different components;

The difference in the proton and neutron causes the nucleus to become unstable and the stablility of the nucleus depends on the ratio of neutrons to the protons. The unstable isotopes undergo spontaneous nuclear disintegration in form of radiation, phenomenon known as Radioactivity. Three main types of radiation are emitted during nuclear decay:

‘Radioactive isotope (also called radioisotope, radionuclide or radioactive nuclide) is hence a species of an element with different mass and an unstable nuclei, dissipating excessive energy by spontaneous emission of radiation in the form of α, β and γ rays.’

These radioactive particles can cause ionisation and excitation of other atoms and these properties are exploited to detect the radioactivity.

The radiation from the radioactive particles can cause ionization, that is formation of ions or charged ions. The ability to induce ionisation decreases in the order of α > β > γ (10,000: 100: 1).

In the instruments using ionisation to detect radioactivity, a pair of electrodes are enclosed in a suitable chamber filled with gas. When an ionising radiation enters the chamber, ion pairs within the gas are formed and a pulse of current flows between the two electrodes. The magnitude of this current is related to the applied potential and the number of radiation particle entering the chamber.

The ion pairs within the gas give different response to interaction with the radioactive particles (α, β and γ rays) at different voltages. Based on the response there are six regions, but only ionization, proportional and Geiger-Mueller regions are useful to detect ionizing radiation. The alpha curve is higher than the beta and gamma curve as there is difference in their ability to ionize. As visible, these instruments are poor for detecting the isotopes emitting gamma radiation.

At low voltage between the anode and cathode, ions are produced from the initial ionization event. The detectors that work in this voltage range is known as Ion Chamber Counter.

Detectors working in this region produce a weak output signal representing the initial ionization by the radiation. Hence radiation with high energy and intensity are better detected. Signal amplifiers may be used, making the instrument expensive and delicate. It provides accurate measurements regardless of the radioactive isotope being used. The electrodes may be present as parallel plates (Parallel Plate Ionization Chambers: PPIC), or a cylinders arranged coaxially with internal anode wire.

With the increase in applied voltage, electrons resulting from initial ionisation events begin to move rapidly towards the anode. During this rapid movement, the electrons collide with other gas atoms and results in ionisation of more gas atoms, that is, secondary ionisation. Secondary ionisation of gas in the chamber results in the production of secondary electrons, which in turn collide and ionize many more gas atoms. This results in the torrent of electrons reaching the anode, known as Townsend Avalanche effect. Current flow is much larger than in the ionisation region. In this region the number of ion pairs collected is directly proportional to the applied voltage. 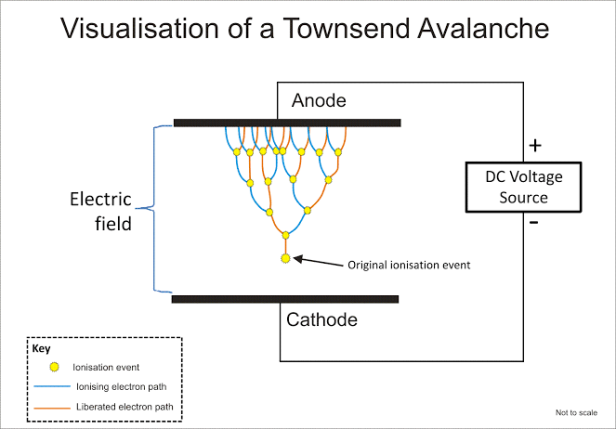 In a proportional counter the fill gas of the chamber is an inert gas. A quench gas is also added terminate the pulse discharge (90% argon, 10% methane).

With further increase in applied voltage, any particle can induce complete ionisation of the gas (inert gas like helium, neon, argon at low pressure) in the chamber. Size of the current is not dependent on number of primary ions produced. In this region, the number of times pulse produced is measured rather than its size.

The counters working in this region cannot discriminate between different isotopes, and can detect all the three radioactive particles.

The instruments using the GM region were main method employed in the detection and quantification of radio isotopes in biological samples, now been taken over by Scintillation counters.

Small hand-held radioactivity monitors based on gas ionisation are usually used in the laboratories. There are different types of instruments working in this region, among which the end window is the most popular type.

These instruments have a thin end window made from Al. It can detect radiation from high energy (32P) and weak emitters (14C), but are poor in detecting of α-radiation and β emitting 3H, due to presence of window.

This can be considered as a type of the end window GM tube, but have a peculiar pancake round shape. These detectors have one end covered with a thin (usually mica) window. The shape of anode is circular. This type can be used for the detection and measurement of beta emitting species contamination, but can also detect alpha particles and gamma rays.

(Just for info: watch the video demonstrating the detection of the three particles by a pancake GM detector)

In this type, a cylinder serves as the cathode while a wire (usually tungsten) running along the central axis serves as the anode. The primary application is measurement of gamma exposure rates. The wall can be thin enough to permit high energy βs to be counted.

End window GM are unable to detect weak emitters but 3H (a weak emitter) is a very commonly used radioisotope in biosciences. Therefore windowless counters are used. However these instruments are rather cumbersome and need to be carried around on a trolley. They are useful for a screening premises for 3H contamination but are rarely used as routine.

Radioisotopes interact with matter and also cause excitation of a compound. This property forms the basis of detection of radioactive compound in Scintillation counters, which we shall discuss in the next blog.

Would love to here it from you!

Thank you and take care!

Other posts by The Biotech Notes:

One thought on “Detection and Measurement of Radioactivity: Geiger Muller Counter and more.”